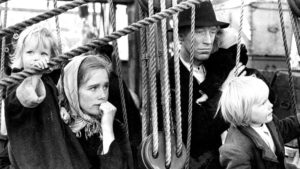 In the middle of the 19th century, Kristina and Karl-Oskar live in a small rural village in Småland in southern Sweden. They get married and try to make a living on a small spot of land. However, the small size of their land, the infertile soil, and some bad harvests make it tough. One of their children even starves to death. Thus, they decide to emigrate to the U.S. They meet a group of farmers with their families planning the emigration under the leadership of a banned priest. They sell everything and embark for the U.S. The journey on the sailing ship is long and tedious. Some of the emigrants will never reach the New World.